USATF boldly does something right

Wait. What’s this? USA Track & Field, arguably the most dysfunctional of all major American Olympic sports federations, maybe getting something not just right but possibly taking an ambitious step to profoundly reshape the future direction of the sport in the United States and even worldwide?

In announcing Monday that it had retained Indianapolis-based Max Siegel Inc. as part of a wide-ranging plan to restructure its marketing and communications efforts, USATF boldly steps into the 21st century.

Siegel is a guy who gets the vision thing, the commercial thing and the relationship thing. USATF needs precisely that sort of help.

No recitation of Siegel’s extraordinary life story and career seems to do it justice. Here’s a very short take:

He has represented the likes of pro football star Reggie White and baseball great Tony Gwynn. Siegel was president of global operations at Dale Earnhardt Inc. and a senior executive at Sony/BMG, serving on the executive team overseeing pop stars such as Britney Spears, Justin Timberlake, Usher and then gospel greats such as Kirk Franklin, Fred Hammond and Donnie McClurkin.

Now he is has his own race team, Revolution Racing, and it wins. His company, MSI, represents sports figures and organizations. It creates literary, television and film properties, including the 2010 BET Network series, “Changing Lanes,” and the ESPN documentary, “Wendell Scott: A Race Story.”

In short, Siegel is a winner across sports, sponsorship and entertainment lines.

The freaky thing is that Siegel actually wants to help USATF.

When he assesses track and field, he said in an interview, “I see all these heroes and I see the opportunity to expand the brand.”

USATF has tried substantive change in the not-too-distant past. It hired Doug Logan, a change agent, to be its chief executive officer; soon enough, it didn’t like the changes Logan proposed; it then fired the agent.

Other Olympic bodies, of course, have also gone outside the so-called “Olympic family” with similarly dim results.

The U.S. Olympic Committee, for instance, turned twice over the past 10 years to outsiders for its chief executive position — Stephanie Streeter and Lloyd Ward. Each lasted a short time.

Critically, Siegel is not being hired to run USATF itself.

Again, he is not being hired as CEO.

Nothing gets done in the Olympic world without relationships. Siegel is a former director on the USATF board and the USA Swimming Foundation; he has ties to other Olympic sports as well. If you were paying attention at the USOC assembly last month in Colorado Springs, you saw him there and might have wondered why. Now you know.

The CEO thing is an entirely separate discussion at USATF. What’s at issue now is that, like a patient in therapy, USATF realized that it might, you know, actually help itself — in this case, its business model — if it just acknowledged it first had a problem and was then willing to do something constructively about it.

Here is the problem:

The sport is stagnant in the United States.

The release USATF issued Monday says that engaging Siegel’s company is part of a “broad, fully integrated service agreement that will unite USATF’s commercial ventures” and that “streamlines its internal staff structure in marketing and communications.”

They’re actually going to throw some resource at the problem — pulling together staff from five separate departments, for instance, to work together with Siegel’s firm — with the intent of making some real money by expanding the reach of USATF’s commercial efforts in marketing, sponsorship, publicity, membership and broadcasting.

Jill Geer, the longtime communications chief at USATF, who through thick and thin has always been outstanding in not just her dedication but performance, will oversee all of this. As a sign of just how serious this is, she and her family are moving from New England to Indianapolis.

To reference “culture” again — track and field shines during the second week of the Summer Games and then all but disappears for pretty much the next three years and 50 weeks. That has to change. Siegel gets it — that track and field has to again become part of our national discussion. 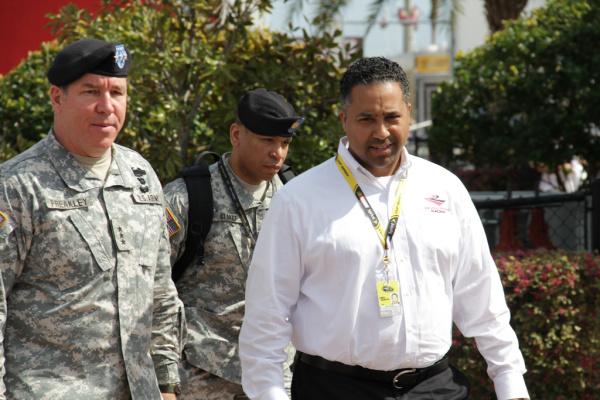 That’s not going to happen overnight. It may not even happen by the start of the London Games. These things take time.

Siegel understands we live now in a culture where reality-TV rocks the ratings. Why not, for instance, a “making the U.S. team” series?

How about the notion of staging a specialty event — say women’s high-jumping, in Vegas, to the back beat of rock or hip-hop music?

Street racing might be cool. How about down Bourbon Street in New Orleans? Or Navy Pier in Chicago?

Anything and everything that might work has to be and should be up for discussion.

One, the world championships in track and field have never been held in the United States.

Two, childhood obesity has more than tripled in the past 30 years, according to the Centers for Disease Control and Prevention. The percentage of children aged 6 to 11 in the United States who were obese went from 7 percent in 1980 to nearly 20 percent in 2008. Over the same period, the percentage of adolescents — ages 12 to 19 — who were obese increased from 5 percent to 18 percent, according to the CDC.

Track and field is the easiest way to start getting a fix on that, because the great majority of those young people can put on a pair of shoes and start walking and then running. And if Max Siegel, who is big on getting tastemakers on board to help impact our popular culture, can do it — bravo.

“I think this is a two- to five-year fix,” he said, referring specifically to USATF — not, this must be stressed, the nation’s obesity issues.

“Year one is restoring the credibility and solidifying the relationship with the core fans and core stakeholders. For me, no matter what you do, there are critics. I think it’s going to take points on the board to achieve credibility and get the trust built back up.

“The second phase is to build brand equity,” USATF revamping its television strategy in particular.

Phase Three, he said, while always emphasizing service to the “core constituency,” can also include a turn toward “new and innovative things.”

He said, “I have been a firm believe that sports and entertainment when used properly is a very powerful way to impact culture.

“You’ve got have something meaningful,” and the best news of all for track and field in the United States would be if, finally, it were again — year-round, day-after-day — meaningful.
Posted By
Alan Abrahamson

Sticky
Blog
Comments Off on USATF boldly does something right

According to longtime track journalist Alan Abrahamson, in this story, Mark Siegel of Indy will shape up and shake up USATF’s marketing operations. One revelation: Jill Geer is moving from Boston to Indianapolis, ending her telecommute gig as PR chief. Here is the official USATF announcement.Here’s what Alan says: “Wait. What’s this? USA Track & Field, arguably the most dysfunctional of all major American Olympic sports federations, maybe getting something not just right but possibly taking an ambitious step to profoundly reshape the future direction of the sport in the United States and even worldwide? For real. In announcing Monday that it had retained Indianapolis-based Max Siegel Inc. as part of a wide-ranging plan to restructure its marketing and communications efforts, USATF boldly steps into the 21st century.” So what does this mean for masters? Who know? Maybe Max has a Midas touch, and some dimes trickle down to masters. I’ve written Max, so stay tuned.

Sticky
Blog
Comments Off on USATF hires marketing guru, but don’t expect much love for masters

INDIANAPOLIS, IN – USA Track & Field (USATF) has engaged the services of Indianapolis-based Max Siegel Inc. (MSI) in a broad, fully integrated service agreement that will unite USATF’s commercial ventures. The move is part of a USATF plan that streamlines its internal staff structure in marketing and communications.

“This type of commercial relationship, combined with the change in our communications and marketing structure, is an unprecedented move that we are very excited about,” said USATF Interim CEO Mike McNees. “Max Siegel is familiar with the needs and challenges of USA Track & Field, and his record of success in attracting sponsors, delivering value to those sponsors, and developing commercially successful media properties will fundamentally change the way USATF positions our brand. And Jill’s deep institutional knowledge and reputation for relationship-building will be critical in leading our new IMC department.”

“USA Track & Field is committed to taking the actions needed into order to truly advance our sport in the marketplace,” said President and Chairman Stephanie Hightower. “We are confident that this new direction will achieve the integrated, successful business model that we have been seeking for years.”

Max Siegel Inc. (MSI) is a sports, marketing, entertainment, and media holding that works with brands to meet lifestyle, sports, entertainment and diversity needs in different industries. It is led by CEO Max Siegel, a former director on the boards of USA Track & Field and the USA Swimming Foundation with more than 20 years as a high-profile executive and attorney in the sports, entertainment and media industries. He previously served as President of Global Operations at Dale Earnhardt Inc; as Senior Vice President at Sony/BMG; and as President of Zomba Gospel. Siegel’s Olympic-family experience includes work with USA Gymnastics, USA Skiing, USA Swimming and the Goodwill Games while he was an attorney with Indianapolis-based Baker & Daniels in the 1990s. In addition to representing sports figures and organizations, MSI creates literary, television and film properties, including the 2010 BET Networks series, “Changing Lanes,” and the ESPN documentary,“Wendell Scott: A Race Story.”

USA Track & Field (USATF) is the National Governing Body for track and field, long-distance running and race walking in the United States and leads the World’s #1 Track & Field Team into Olympic and World Championship competition. USATF encompasses the world’s oldest organized sports, some of the most-watched events of Olympic broadcasts, the #1 high school and junior high school participatory sport and more than 30 million adult runners in the United States. For more information on USATF, visit www.usatf.org .